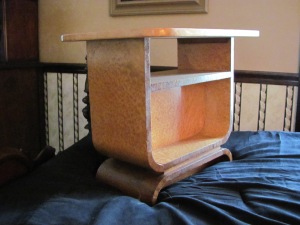 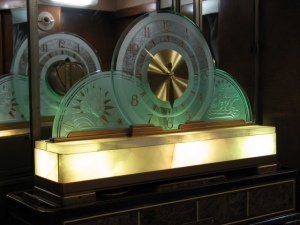 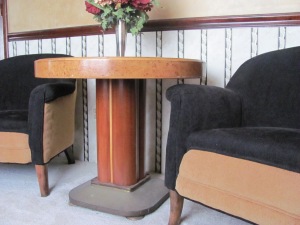 The 2 over-stuffed chairs, occasional table, large round table, green jade mantel clock, and ladder-back chair can be seen in the 1936 depiction of the First-Class Lounge.  The Lounge is a favorite room aboard Queen Mary by many collectors and historians, including myself.  The pieces of furniture in my collection can clearly be seen in the artist’s painting, particularly the ladder-back chair.  I chose this room for the encounter between the Bennetts  and the otherworldy mother with two small children in “The Travelers”. The following excerpt highlights that supernatural experience as recalled by James Bennett to Guy Turner:

“With the power gone, the Lounge was cast in a twilight, a perpetual overcast that was absorbed by the room making everything darkly vibrant.  I stood beside Mrs. Schofield who sat talking, and we faced Jess and Mr. Schofield who also sat.  I heard something over Mrs. Schofield’s voice that I can only describe as the soft rustling of leaves.”

“Or water running over rocks?  A rippling sound?”

“Yes!” Jim said, raising an exuberant finger.  “That is exactly what it sounded like!  Exactly.  I looked over Jess’s head and saw three figures descending slowly from behind the columns as though they were walking down invisible steps.  Mrs. Schofield was shocked into silence.  She drew a deep breath and held it, her eyes wide.  Jess and Mr. Schofield twisted around and saw what we saw.  The figures seemed to float as they came closer, passing behind another column, then gained substance.  Jess rose from the sofa, startled, and looked as though she might flee.

“We saw quite clearly then, a young, exotic, long-haired woman, very naked, with a child in each hand, a boy and a girl, and they were naked as well.  That young woman was beautiful with her olive skin and dark hair past her waist.  She gazed wide-eyed about the room.  The girl was about two years old and the boy was no more than a year.  He tottered and it was obvious he hadn’t been walking for too long.  They looked very Mediterranean but their faces were emaciated and their eye sockets were hollowed out.  We could see her fear as she approached us hesitantly.

“She looked across our faces and decided upon Jess, I guess because she seemed the same age.  And she was a female.  She began speaking but, of course, we couldn’t understand what she said.”  Jim stopped and closed his eyes, lost in another time.  “I can hear that broken voice still, so sad and filled with desperation.

“Jess had brought a hand to her mouth and her eyes bulged as the woman continued to beseech her in that unknown language.  But then she spoke a language we all understood.  She lifted the girl’s arm and indicated with her free hand the girl’s ribs and pelvis protruding grotesquely.  She looked back to Jess with a haunted look and their eyes locked.  Jess understood immediately why she was there and what she wanted.  The woman began weeping and showed Jess the boy’s ribs.  I had seen that same scene on the afternoon the concentration camp survivors stepped from the train.  I had hoped I would never see anything like that again.  Wherever they came from, whatever predicament they were forced to endure, we could not know but anyone could see they were in dire straits.  Her face was wild with desperation and her crying was very hard to bear.  It was a moment both fantastic and heartbreaking.

“Jess reached over and took that pitiful creature’s hands and the show of compassion brought more tears.  Jess did not cry but she somehow commiserated with that woman, and they shared a language beyond words in the twilight of that vast room.  Jess pulled the stranger close and she dropped her head to Jess’s shoulder and absolutely sobbed for a long moment.  Then she straightened, wiped her tears and knelt to the children and spoke softly to them.  They listened to her intently and both looked up at Jess at the same time.  It gives me chills just remembering their uncertain stares.  She embraced and kissed each of them, then stood and was turning to walk the way she had come when Jess reached for her again and took her hand.  She quickly the name tag from her shawl and placed it in the woman’s hand.  ‘Bennett’, Jess said, indicating herself with her free hand to her chest.  ‘Bennett’.  The woman looked at the tag in her palm then at Jess.  ‘Bennett’ Jess said, inviting her to repeat the word.  The woman timidly opened her mouth and my name fell from the lips of a woman who visited from God only knows where.  ‘Bennett’ she said. She repeated it three more times.  I had given Jess this nametag as a promise of my love to her, and she, in turn, gave it to that woman as a promise to love her babies.”  Jim pushed his forearm toward Guy so that he might see the goose bumps.  “My God, young man, can you even begin to imagine that scene?  Can you?”

“No, I can’t imagine,” Guy said.  “I truly can not.”  The little piece of plastic was imbued with a history even richer than Guy could have anticipated.  He still had a sense that it belonged to him in some way and barely resisted the urge to take it from Jim.  Barbara wept quietly and cast a furtive glance over her shoulder to the children’s school pictures as though seeing them for the first time.

“The woman folded the name tag in her palm and turned to walk the way she had come.  Her shoulders were racking and she hurried away, sobbing loudly now.  The little girl ran after her but the woman seemed to ascend again just a foot or so off the carpeting and just…just…”  Jim’s voice trailed and he stared beyond Guy with a faraway look.  “There was a flash of lightning and she shimmered for a moment, then she was simply no longer there, as if she had stepped through a doorway.”

Jim was quiet a moment and the pause after such a recollection was like a piano key sounding in a deserted room.