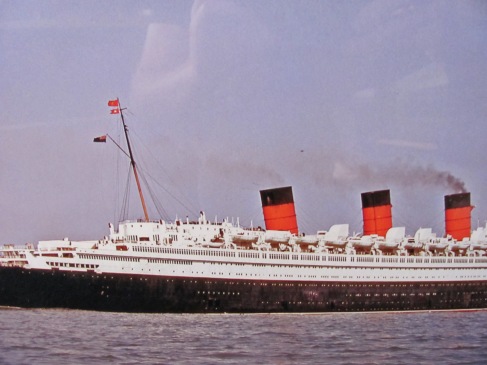 In 1930, the Cunard Line laid the keel of a ship then known as #534.  Cunard officials had planned on naming her Victoria since the -ia suffix was used on their liners (Mauretania, Lusitania, Aquitania, etc.) while the White Star Line used an -ic suffix on their liners (Olympic, Titanic, Majestic, etc.).  In 1931, however, Cunard shut down building of their superliner due to the Depression.  Over 80% complete, the hull rusted on the stocks until 1934 when the British Parliament agreed to a government loan to complete the giant with the stipulation that the rival lines merge and become Cunard White Star.  The president of Cunard had a golf date with King George and requested permission to “name the ship after England’s greatest queen”.  Without batting an eye, the King replied, “My wife would be delighted!”  So, #534 was launched in September and christened Queen Mary by her majesty.  In this way, the suffixes for each line’s ships would be eliminated.  From the time Queen Mary made her maiden voyage in 1936 until her retirement in 1967, she flew a double house flag on her aft mast.  In the attached photos, one can see the flags whipping high above the deck.  I own the last house flags she waved and have them displayed on my living room ceiling.  They are too large to mount on the wall as they are over 6 feet tall and 9 feet wide.  Because of the Titanic disaster, Cunard White Star Line dissolved the corporation by liquidating White Star’s assets and became simply Cunard.  The White Star Line became a memory, synonymous with the legendary disaster that befell its greatest ship.